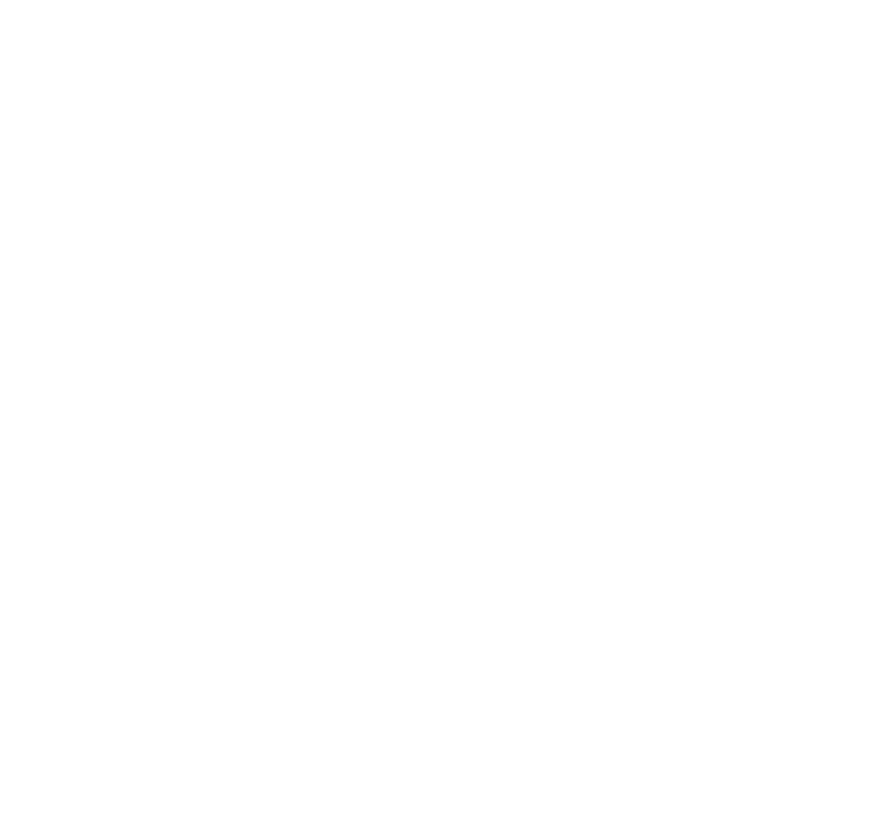 We understand that the psilocybin genus is not facing an ecological crisis globally.

However, Western culture has had a devastating impact on the Indigenous communities in the Mazatec Sierra, where mushrooms are intrinsically connected to spiritual work, community health, and the survival of their culture.

Today, the Mazateco language is endangered and risks being lost. An entire culture, worldview, and knowledge survive through these languages.

Cultural and healing practices as well as names of plants and wildlife are often expressed through language.

Contribute to a future where the mazatec languages and traditional relationship to mushrooms is preserved.

Where the Funds go

Your donation through Grow Medicine goes towards supporting an in-depth community-based biocultural assessment in the Mazatec Sierra.

This assessment asks the question of how they can best be supported over the next 100 years, so their cultures can thrive. 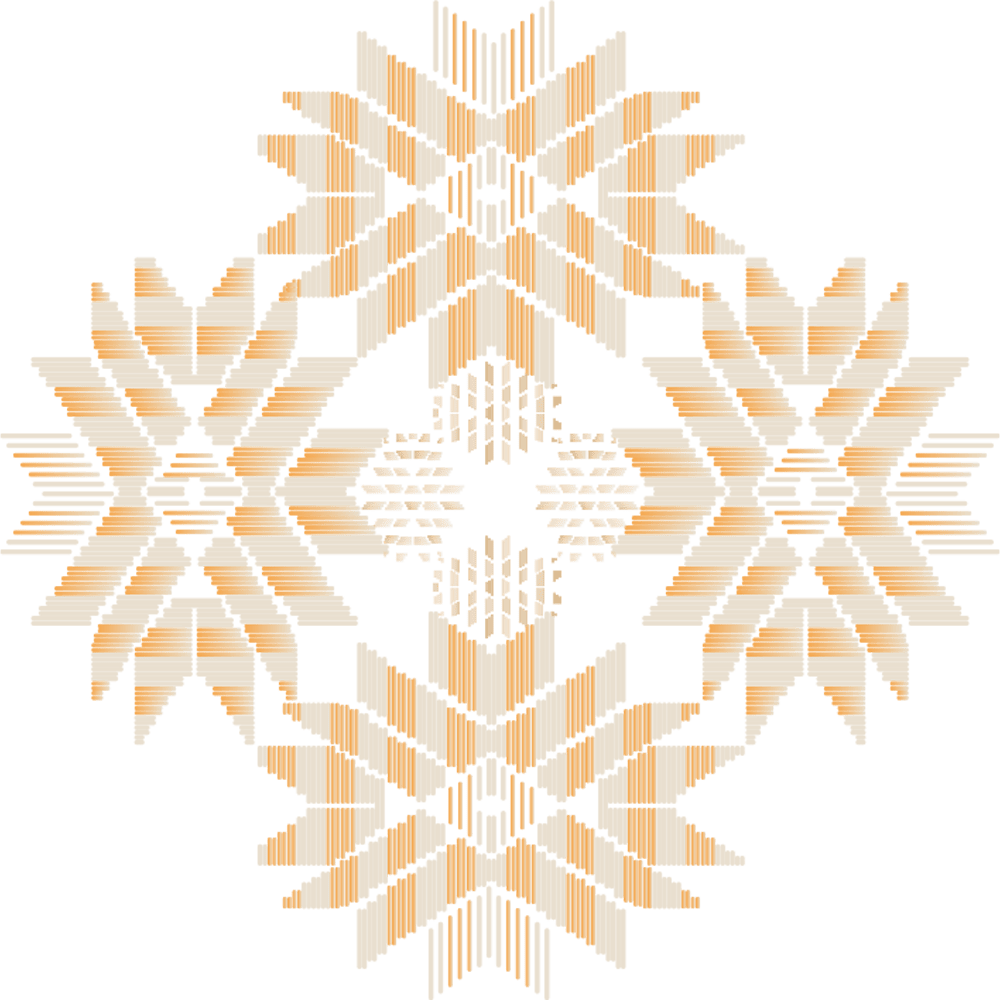 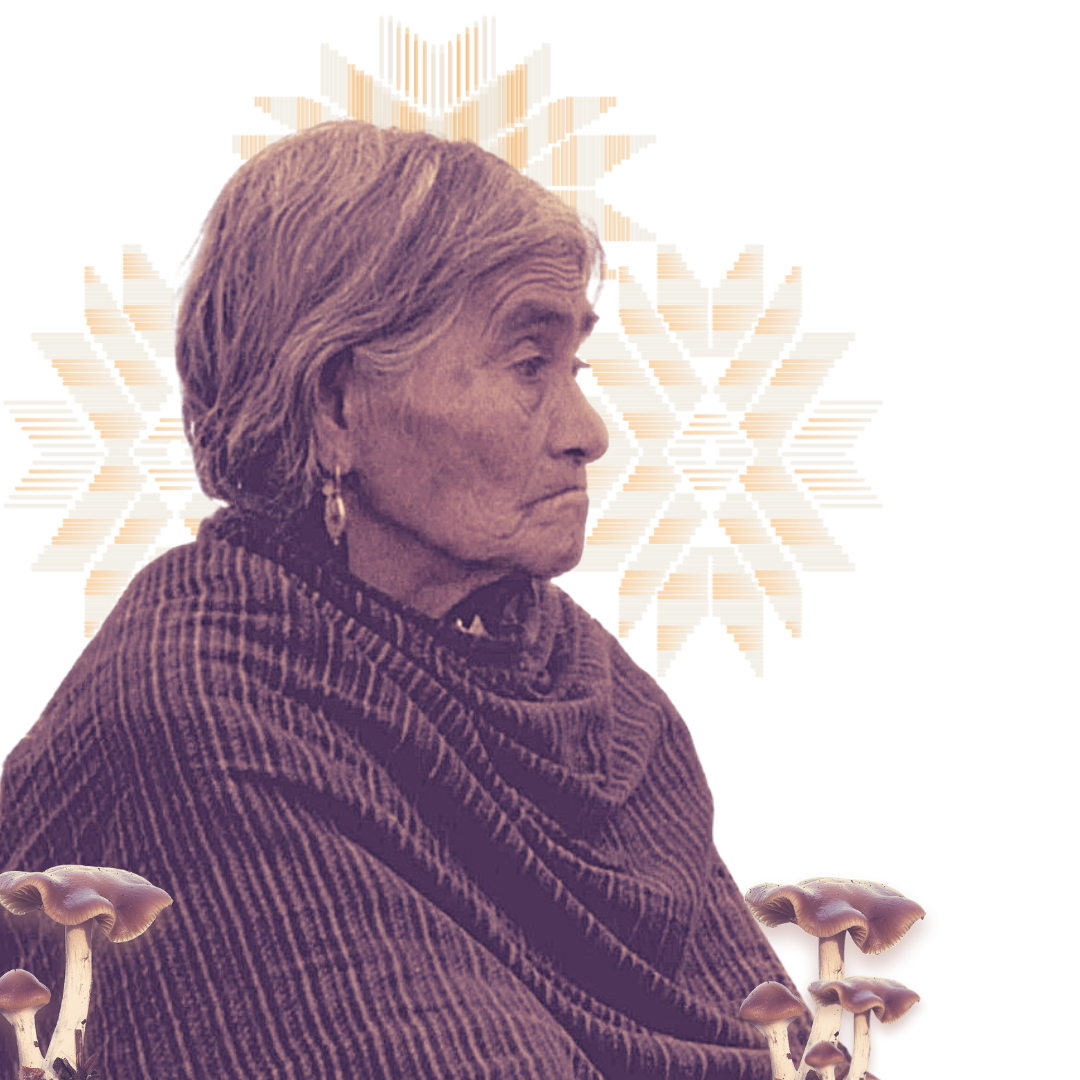 In the 1950s, mycologist Gordon Wasson and his wife traveled to the Sierra Mazateca to research the religious use of mushrooms by the native people.

This is where they met a traditional healer named Maria Sabina.

Maria Sabina guided the Wassons’ through a traditional Mazatec ritual – a velada ceremony with sacred mushrooms. 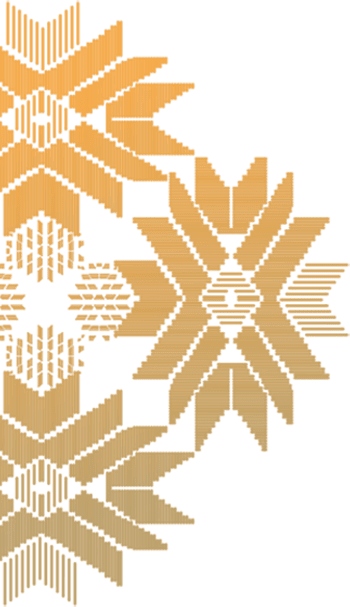 Despite Maria Sabina's request not to share her name or location, In 1957, Wasson wrote an article that appeared in LIFE magazine.

This article spurred the onset of tourism to the Mazatec Sierra and influenced the commercialization and monetization of ceremonies and sacred mushrooms. 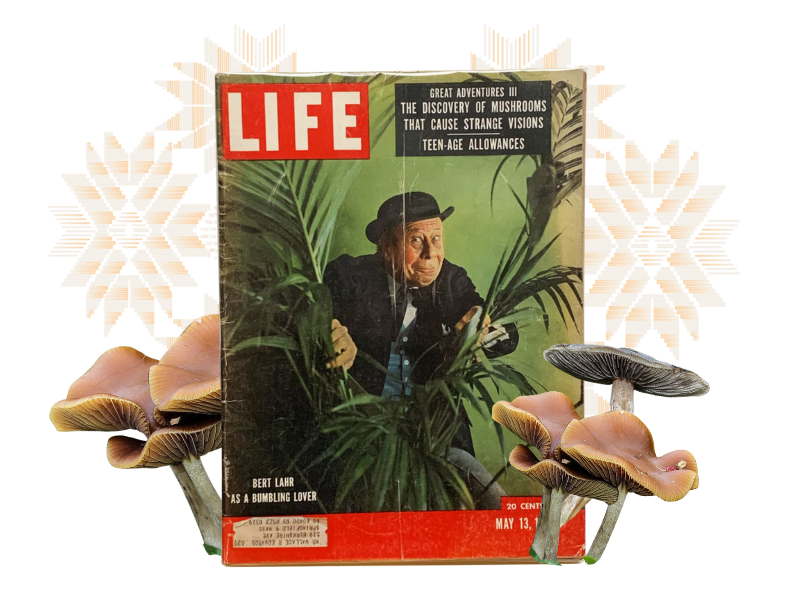 This western influence had devastating
cultural repercussions on the Mazatec
community and their bioculture.

this story is extremely informative for us today.

It demonstrates the widespread and unfortunate consequences we can unknowingly have on a bioculture.

It is informing us how we can embody best practices and the principles of do no harm to prevent this from happening again.

Today, psilocybin
is at the forefront
of psychedelic research.

Research demonstrates that psilocybin can support the treatment and healing of a wide range of mental health issues.

The pharmaceutical industry is seeing the opportunity to create a new generation of psychopharmaceuticals that provide a solution to the mental health crisis.

As a result centers are opening up all over the United States, Europe, and Canada, and the psilocybin “industry” is receiving a large influx of hundreds of millions of dollars of investment.

As the world comes to embrace the healing potential of mushrooms, we can actively participate in being good stewards of this medicine and uplift the traditional knowledge holders.

Despite the fact that you can grow your own mushrooms and/or easily access them, being in right relationship with the traditional knowledge holders of sacred mushrooms encourages us to engage in best practices through benefit-sharing to support the thriving of this bioculture.

Your donation allows you to contribute towards repairing the damage that was done and continues to this day.

Where your donation Goes

Your donation through Grow Medicine goes towards supporting an in-depth community-based biocultural assessment. We believe this is a crucial place to begin.

IMC Fund is supporting a small technical team in the Mazatec Sierra made up of academics and community leaders who are undertaking an initial needs assessment over the next 18 months, through the end of 2023. At which time, assessments will continue into other communities.

What is a community-based assessment and why is it important?

A community-based assessment starts by asking a broader question:

“What do the people of the Mazatec Sierra want and need in order to thrive for the next 100 years?

Then we need to be quiet and listen.

Support is then directed in the way the community is asking for.

This is what
solidarity-based support
means.

Benefit-sharing could help strengthen community-based governance, support biocultural conservation and training, as well as education to help pass on traditional language and healing practices to the next generation.

We know from early conversations with the communities from the Mazatec Sierra that they are requesting support with language and land preservation as well as techniques for mitigating the ongoing impact from psychedelic tourism. 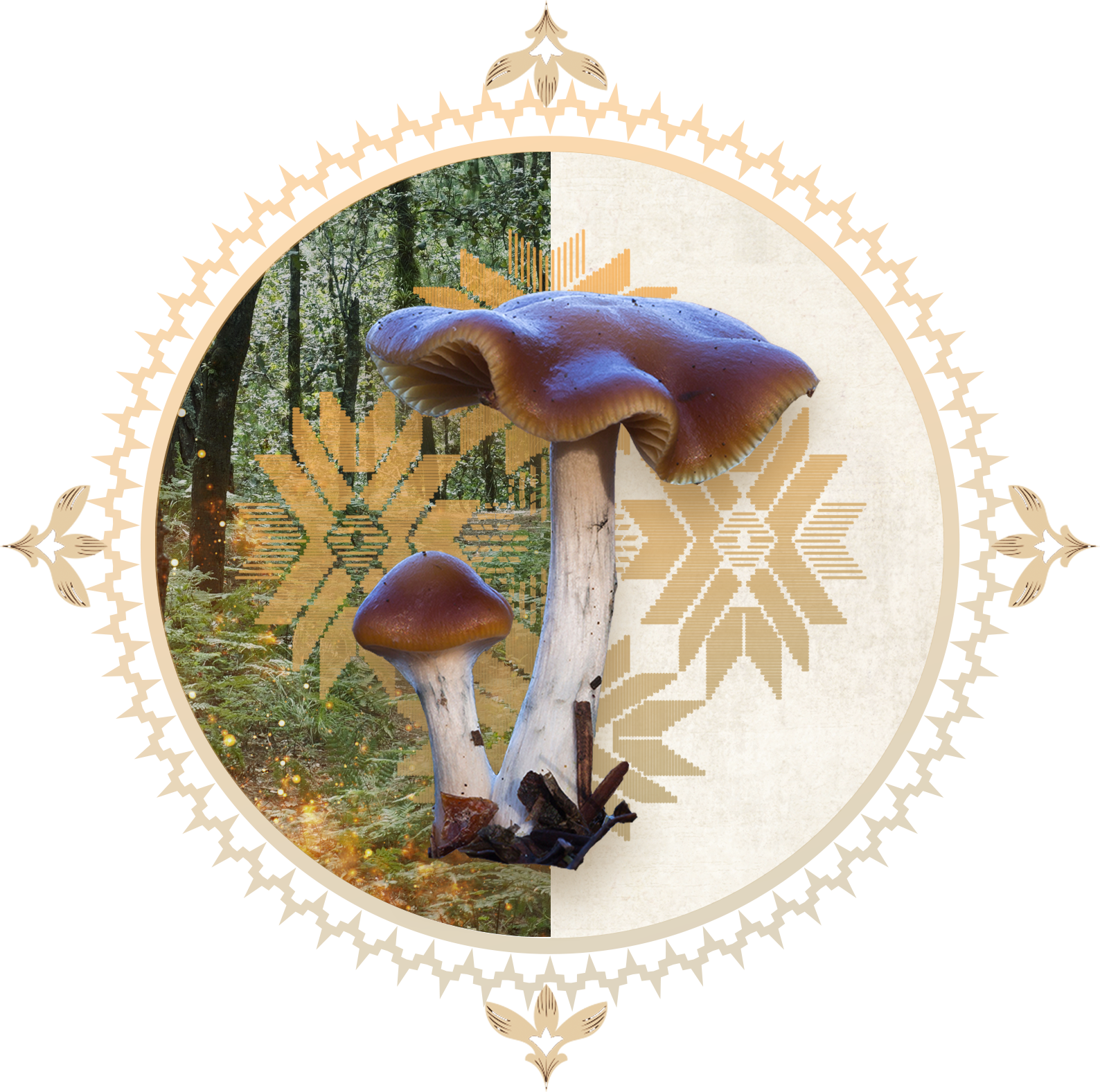 Psilocybin mushrooms, also known as Ndi Xijtho or “little things that sprout from the ground” in the Mazatec language, refer to a group of mushrooms that contain tryptamine alkaloids such as psilocybin, and psilocin. Popular mainstream cultures often refer to the sacred mushrooms as “magic mushrooms.”

When describing the incredible potency and value of the psilocybin-containing mushrooms he referred to them as “magic mushrooms”, coining a term still used by psychedelic enthusiasts today.

Globally, there are more than one hundred species of fungi that contain psilocybin and psilocin, and over 53 species of the psilocybe genus in Mexico alone.

The most common and well-known genus that produces the psychoactive alkaloids is psilocybe, and most of its species are found in humid subtropical forests. Mexico has the greatest variety of naturally grown psychoactive mushrooms which are a sacred medicine and a way of life for the cultures of the Mazatec Sierra.

Archaeological evidence shows that different ancient cultures have been linked to the use of sacred mushrooms since Paleolithic times. Church records show mushroom use in Europe dated back to the Middle Ages.

In Mexico, sacred mushrooms were mentioned for the first time in 1530, and in the 1950s the first scientific paper was published on the sacred indigenous use of mushrooms by the Mazatecs of Huautla de Jiménez in the state of Oaxaca.

the Mazateco is an endangered language and risks being lost.

The Mazateco language is fading away and being replaced by Spanish.

Cultural and healing practices as well as names of plants and wildlife are often expressed through language.

An entire culture, worldview, and knowledge survive through these languages. If it disappears, so does the Mazatec culture. The potential loss of this language and what it represents deserves our preservation efforts.

The Mazateco is an endangered language mainly spoken in small areas in the northeastern part of the state of Oaxaca, Mexico including the Mazatec Sierra.

For many of the smaller communities in the area, the Mazatec language is still vigorous and is the primary language taught in schools. However, in larger communities, more people are replacing the language with Spanish.

We must embody right relationship to support the continuity of the traditional Mazatec wisdom through preserving their stories, language, and knowledge.

The Mazatec people are losing their traditional healers

To the Indigenous peoples of the Mazatec Sierra, health and spiritual problems are treated through healers and people of knowledge are sometimes referred to as “chojta chjine.”

The chojta chjine are chosen by deities through dreams or initiation rites to perform healings, rituals, and mystical visions for the Mazatec people using medicinal preparations of sacred mushrooms in absolute darkness. The Mazatecs say that the mushrooms hold the wisdom and they endow the chojta chjine with an inspired capacity to speak through their Mazatec language and receive visionary insights that will guide their community on the right path forward, alleviate illness and disease, and heal their culture.

The mushroom ceremonies are sometimes called “velada”, oftentimes accompanied by chants and prayers. Language is a fundamental part of the healing rituals and a central feature of the worldview of the Mazatec people.

We not only need to embody the best practice of benefit sharing, but also honor of the historical connection of sacred mushrooms to the Mazatec people and recognize that they shared their wisdom and knowledge of the mushrooms with the western world, which impacted their entire culture.

It is our responsibility and ethical obligation to ensure a future where Indigenous Peoples, their medicines, and knowledge thrive for generations to come.

Your donation through Grow Medicine supports the cultures of the Mazatec Sierra, including the Mazatec, Zapotec, and other groups and their rituals, language, arts, and healing traditions. 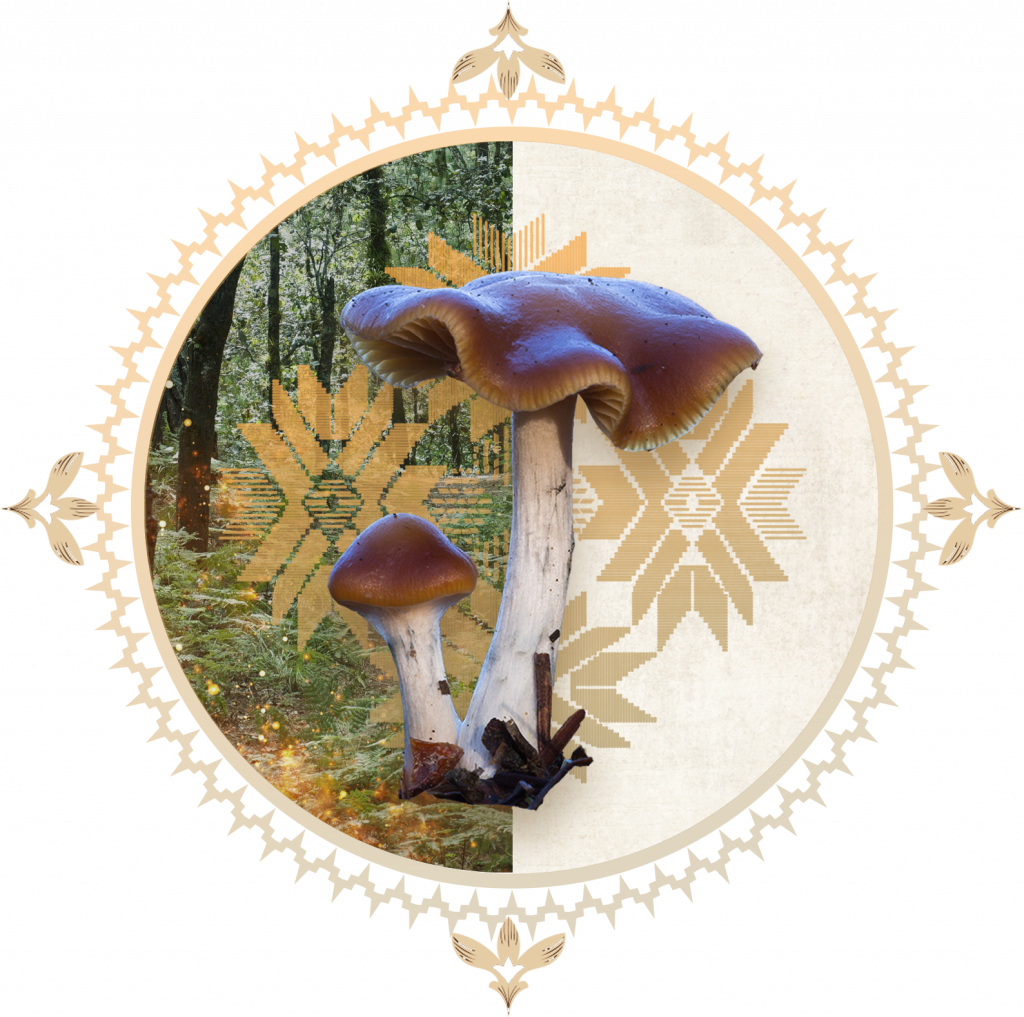 In alignment with specific requests of
Indigenous communities.

This is how we stay in Right Relationship and contribute to a future we can all be proud of.

Support the bioculture of sacred mushrooms 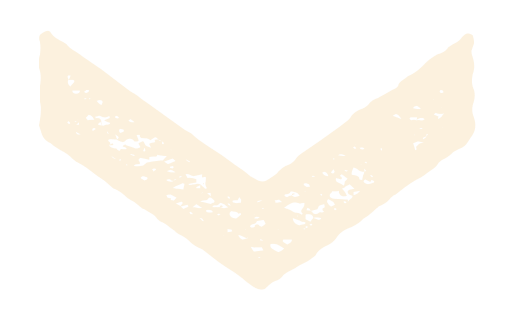 and bioculture
you want to support